The Bangalore based Food delivery app ‘Swiggy’ is valued at $1.3 Billion in recent rounds of investment. With this evaluation, they entered in in prestigious Unicorn club. Unicorn Club is a list of the start-ups which have made their evaluation above $1 Billion. Among the food delivery app, only Zomato could make the standing on the list.

Swiggy raised $210 Million funds from DST global & Nasper at the valuation of $1.3 Billion. The valuation is higher than that of Zomato, which was evaluated in May of last year at $1.1 Billion. Zomato is also in talks with the investor to raise fund. 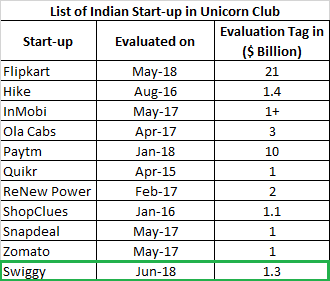 Swiggy was started in August 2014 and became the fastest entrant in the club. The company was co-founded by Sriharsha Majety, Nandan Reddy, and Rahul Jaimini. So far they have raised the fund of $466 Million.

The market is having many big names like Zomato, Uber Eats, Foodpanda etc and the competition will be tougher now.

“With this investment, we will continue to widen Swiggy’s offerings, along with bolstering our capabilities and plugging the gaps in the on-demand delivery ecosystem,” said Sriharsha Majety, CEO, and co-founder of Swiggy.

Swiggy, which operates in 15 cities including Bengaluru, Delhi, Mumbai, Pune, Hyderabad, and Kolkata, claims to have more than 35,000 restaurant partners on its platform and a delivery fleet of over 40,000.